From Poland to Malaysia with a smile and a thumb

Karol Zientek is a young Polish journalist who one day pointed at Singapore on a map and decided it was far enough away to go hitchhiking. His decision brought him 10 months of travelling without paying a penny for accommodation, and many, many unforgettable stories. He started a blog to give advice on cheap travel, and to share experiences.

One bag, three friends, 6 months that turn out to be 10, almost 310 nights in which he did not pay for any accommodation, with only 2,500 Euros in his pocket and enough enthusiasm and smiles to hitchhike for about twelve thousand kilometres… and back! That’s the story of Karol Zientek, a polish guy who wanted to do something big, but didn’t know what. He was about to graduate as a journalist, and while he was finishing an internship in France, he looked at the map, pointed at Singapore and thought it looked far away enough to go. He decided to continue working for a while as an intern to save some money, and then start his journey as soon as possible. “It is that easy, when you want to do it you don’t need to think too much about it,” he said by Skype from England, where he has just started a masters degree in International Relations. 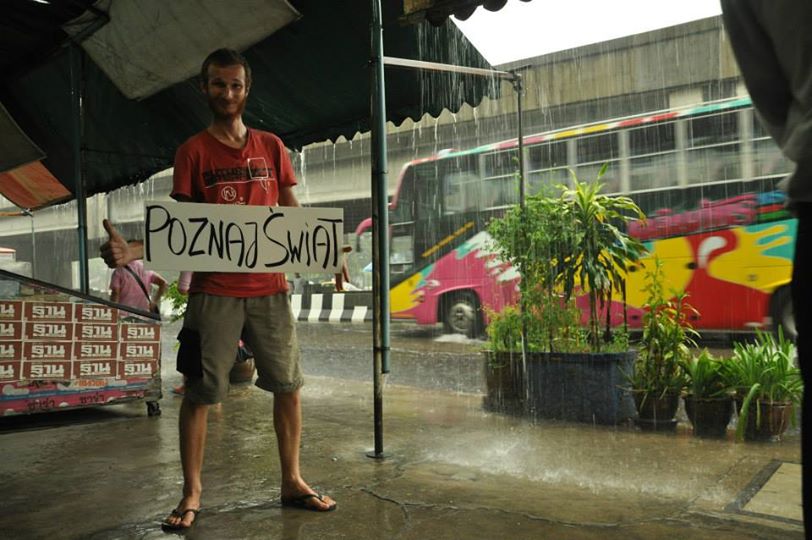 You need to plan some things but bear in mind it is always going to change.

Initially, the idea was to travel by himself while doing some journalism projects, but in the end two more friends joined up him, and they looked for another one to be able to split in pairs on the road. “We were starting to look like the Lord of the Rings Crew”, Karol laughs. He created Jolly Wandered with his friend Mateusz, a blog where they shared their experiences and advices to travel cheaply, and only two weeks after he arrived in Poland they started the journey. “My family told me I was crazy, but they know I am, so they were fine with it”, he remembers. They aimed to get from Warsaw (Poland) to Singapore (Malaysia) in 6 months, but in the end it took 10. “Hitchhiking is probably the most unpredictable way of transport so we could not make a strict plan. You know things are going to turn up completely different”, he explains. When asked about the planning, he repeated, “You need to bear this unpredictability in mind and also know in advance where to get visas for each country.” “You have to visit specific cities to do the paper work. When we left Poland we only had the visa to India. So we were depending on which visas we were going to be able to acquire, and which we weren’t. You’ve to take your time”.
Visas were the reason why they had to take some planes, though there were not considered in their plans. “The day we applied for the visa to Pakistan, two girls from Czech Republic were kidnapped on the border, so we had to take a flight from Teheran to the United Arab Emirates, and then to India. And then the second time we had to take a plane because the border of Myanmar was closed and we flew to Thailand. So yeah, plans always change”.

Map of the route they made for their website. Jolly Wandered©

That’s why, as far as he sees it, you should travel without any expectations, because you never know what’s round the corner and you have to be prepared for the unexpected. With this attitude, it is not strange that for him the whole trip was an amazing experience. When he is asked what was the best moment of the trip, he can’t think of an answer. “Best moment? It’s impossible”. Instead, he starts telling long and amazing stories: how they became illegal immigrants in Turkey without knowing it, how he was a monk for a day, how many times they were almost deported, how he managed to enter a military base in Russia, and even how he said “Fuck you” to a Persian ambassador without realising (a thumbs up in Iran means something very different!). While travelling back to Europe by himself (because his friends decided to take the train) he ended up in a car full of drunken Russian men, and a coffin on the back seat! “It was almost midnight, I was in the middle of Siberia trying to reach somewhere warm, every driver who stopped was drunk and like the 10th car I thought, no matter what, I’m going with them. I was a bit scared, yeah, but at the end the person in the coffin was the father of one of the Russians and I finished the night as drunk as them, so it was that strange!” he clarifies, excitedly pronouncing some Russian words he learnt.

I would give lots of advice, but the most important one is: smile.

Of course, only English is not enough to cross Asia. “In Iran we had to speak Persian. We learnt 100 words, though I forgot everything now! “- He laughs- “But we spent 5 weeks there and after that I could understand some things. English is useful in the cities but in countries like China, Vietnam or Indonesia… forget about it. French was useful in Cambodia, Laos and Vietnam, because they used to be colonies, and in China I speak survival Chinese already so it was good”, Karol explains in detail. 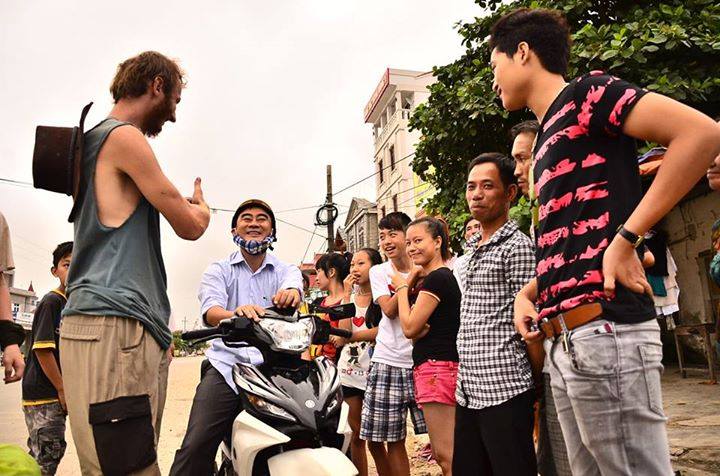 The team in Vietnam. Jolly Wandered©

However, when asked for advice, he points out that knowledge of a foreign language is not the most important thing. Instead, he recommends smiling a lot. “You know, in every culture different gestures are interpreted in different ways but a smile is always the same; it’s is the positive energy, smiling to people is very important. Also, try to do what others say is impossible”.
That’s a sentiment shared by a lot of people who love travelling, but not everyone feels comfortable exposing themselves that way; they are scared of the dangers, which obviously exist even more so for women. Karol’s answer is sincere: “I would not have done this trip alone if I were female. We were travelling with a female friend and I was with her all the time. Especially in Russia and the Muslim countries it can turn up difficult for women. I was telling everyone she was my wife or my sister and we did not have any problems. No, I don’t think you should do it alone, but this does not mean you have to miss out. It’s an incredible experience”. 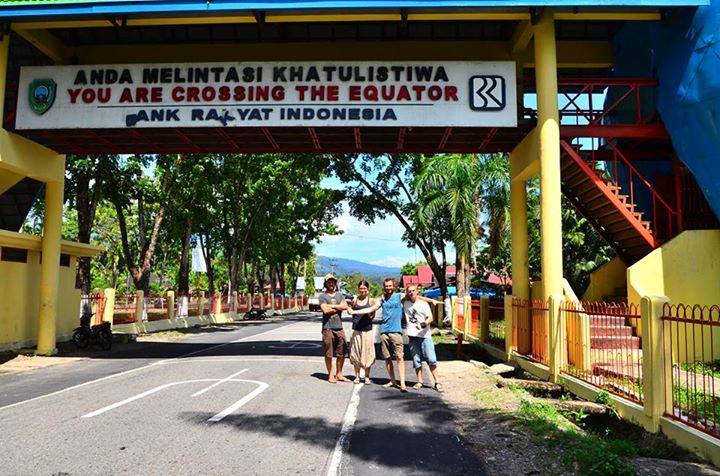 Karol, Dorota, Mateusz and Bartek travel together from Warsaw to Singapore. In the picture they were in Thailand, about to cross the Ecuador Meridian. Jolly Wandered©

In fact, he admits these 10 months of travelling changed his life forever. “I talked to so many people, so many people helped me… we did not even asked for help, we never asked for money or food, only for transport but everyone was doing so much for us! Being in India or Laos, with people who don’t have much, and they give you so many things.” He learnt to be more tolerant and open minded, and also to trust people and their intentions. A major benefit of the trip? He no longer fears rejection. “Obviously lots of people help you but others just don’t. So you need to learn that that is going to happen, and lose the fear of negative responses”.
But when you trust people, you don’t judge them, and you smile, he says, this faith is given back to you. “We slept with local people or in temples, always, not once did we paid for accommodation”. Half of the time, they managed this by using sites like Coachsurfing and Hospitality Club, and the other times just asking people or knocking on doors if it was cold. “Temples were also a good choice, they were free and really amazing!” he remembers. 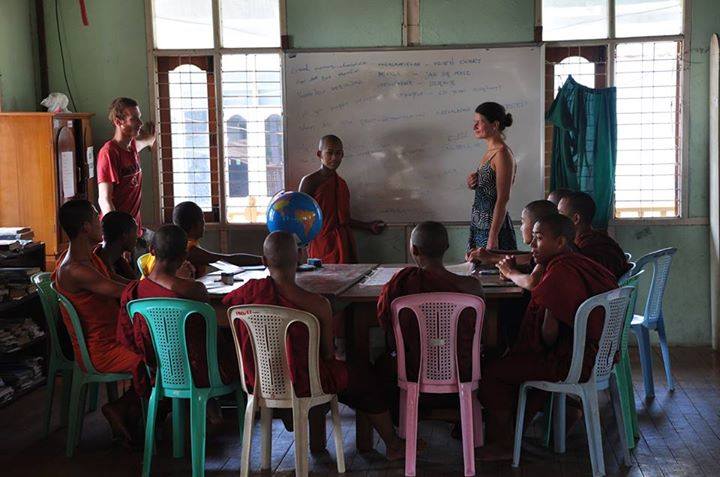 Karol and Dorota teaching English and Geography in a monastery in Mandalay, Myanmar. Jolly Wandered©

In order to do that you need to be prepared to interact with local people, respect them and mix with them, which includes eating everything that looks like food (or not, as the case may be!). “The strangest things we ate were a lot sort of insects, hamsters in Mongolia, in Vietnam small fried ducks, which were ducks inside eggs but not fully grown… Also we drank horse milk and ate a goat’s head”, Karol says slowly.
His battery is running out.

– Don’t worry Karol, just one last question. After all those experiences, do you think you can ever stop long term travelling?
– No, never. Don’t start travelling because you can never stop. That’s the bad thing. When you are back in your home you really think you don’t suit that much, you have changed… That’s the other side of the coin. You need to find your place again and that’s travelling, I guess.

This final thought reminds me of the American journalist John Dos Passos, who once wrote: “Like all drugs, travel requires a steady increase in the dose”. 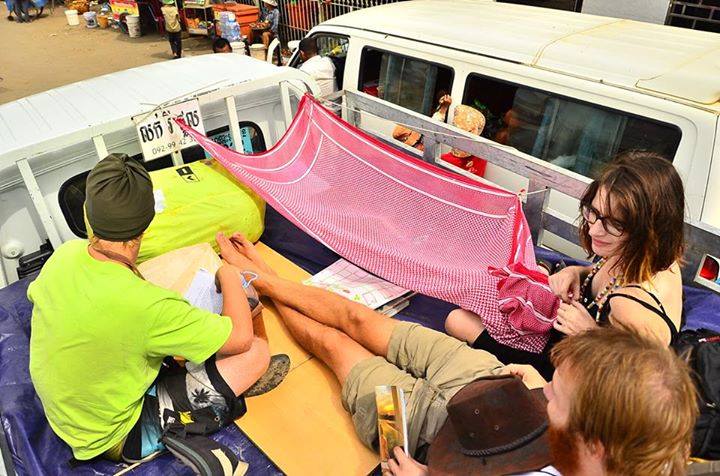 Karol and a girl from New Zealand who joined them for a couple of days. Jolly Wandered©

Europe is…. A continent full of diversity, cultures and people that I want to meet in deep. It’s the place I was born and therefore the one I’m most critical with. We need to change lots of things to do something better.

Europe is… a place where I feel at home